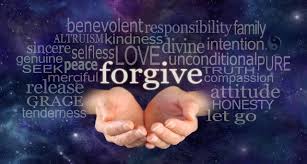 Forgiveness is very difficult, because it doesn’t come naturally to our negative mindset, we prefer to blame the ‘other’, it’s easier and more self-fulfilling. We tell ourselves, ‘ I didn’t do anything wrong!’ or ‘If they hadn’t done/said this or that, then I wouldn’t have done/said this or that.’

There’s an idea that you can forgive someone without really meaning it but just to get some peace for yourself, I recently saw this meme ‘Forgive someone not because they deserve it but because you deserve peace’

I do acknowledge that It’s not always appropriate to speak to someone who hurt you or to try to mend that relationship.

Do you sometimes decide self-righteously that you’ve forgiven someone you’ve been in a difficult relationship with but you will never have anything to do with them again nor ever see them again.

If you did have to see them again how would you feel? Imagine it for a moment and notice what arises.

If you feel all the familiar anger, hurt, and grief then you have not worked through all the emotions in order to fully forgive him/her. When you forgive a person then you are ready to move forward and leave the baggage behind. You will feel that you have dealt with the issues involved.

How can you work you’re way through these emotions resulting from a difficult relationship with someone? Meditation is the way to find resolve. A RAIN meditation practice (Tara Brach) can be very helpful.

Forgiveness is also about accepting some of the responsibility. What could you have done differently? This may require some soul searching and self forgiveness. Self forgiveness means ‘to touch certain parts of yourself with mercy. Recognise your humanity. It’s a kind but fierce process and can take some time.’

Start with a simple situation of conflict in your life, reflect on the situation and person. They too have problems and issues from childhood, they too are suffering.

We are all pushing each others buttons then getting in our own way of moving forward, by over thinking, over analysing, blaming and judging. Instead of recognising the suffering in others and realising they are just like us.

Forgiveness is a difficult path and cannot be done on a whim or our emotions will still be unleashed. When we find true compassion for others and ourselves then forgiveness can heal.